Open a
Random Page
from this site

Masters of Existence: Subjectivism and Self Worship in Satanism (2015)

The Pro-Blasphemy Position: Satanism in Action! (2008)

Satanism and Elitism: The Alien Elite (2002)

Satanic Government and the Distrust of Human Nature (2001)

Satanism is a ferocious religion based on materialism, the empowerment of the self and the ego, the carnal realities of animal life, the questioning of social taboos, the ridiculing of most other religions, and the promotion of tough social justice. Satan is not real but is the most ideal and accurate symbol of reality and nature: The world is full of violence, suffering, stress, striving and death - the life cycle itself requires all these things. It is clear that no symbol of 'goodness' or 'light' can embody it all. The vast, uninhabitable darkness of the Universe, with galactic cataclysms rendering huge destructions on huge scales, means that only Satan can embody the true state of everything that is. Satanists tend to use all the symbols of darkness and evil. There is no heaven, no hell, no afterlife, no angels or demons: there are no gods or saviours apart from ourselves. But if there was a god, it would surely be utterly evil.

The Church of Satan was founded in 1966 by Anton LaVey and as of 2001 its Black Pope has been the powerful and articulate Peter Gilmore. Satanism as religion is highly skeptical, rationalist and philosophical, demanding evidence and strong argumentation, but is otherwise open-minded on magic and some parts of the supernatural. Satanists are often bold, intelligent, demanding; but are also often subtle, cautious, hidden, while others still are outrageous, aggressive, angry and puzzling. It is a religion of fire, drama, depth and forceful progress.

From Peter Gilmore, the High Priest of the Church of Satan:

“Satanism has been defined. It does not allow for distortions such as belief in cosmic entities, animal sacrifice, or claims that one is a "demon incarnate" amongst other theistic delusions.”

“My brand of Satanism is the ultimate conscious alternative to herd mentality and institutionalized thought. It is a studied and contrived set of principles and exercises designed to liberate individuals from a contagion of mindlessness that destroys innovation. I have termed my thought "Satanism" because it is most stimulating under that name. Self-discipline and motivation are effected more easily under stimulating conditions. Satanism means "the opposition" and epitomizes all symbols of nonconformity. Satanism calls forth the strong ability to turn a liability into an advantage, to turn alienation into exclusivity. In other words, the reason it's called Satanism is because it's fun, it's accurate, and it's productive.”

There are so many ways or organizing religions and beliefs, and so few religions fit neatly into categories, that I must present a list of key terms without attempting to order them into a coherent order. Hover over bits of the text for relevant links:

Some pages about what Satanism is not:

A sensible one-paragraph description of Satanism can be found in the writings of a scholar of comparative religion, Jesper A. Petersen:

“Rationalist Satanism is an atheistic, sceptical, epicurean materialism as formulated by Anton Szandor LaVey in The Satanic Bible and other writings, and then expounded upon by a host of spokespersons in the following years. [The Church of Satan does] consider Satan to be a symbol of rebellion, individuality, carnality and empowerment, and Satanism the material philosophy best suited for the 'alien elite'; catchwords are indulgence, vital existence and rational self-interest. Although ritual practices are described and an ambiguous diabolical anthropomorphism or mystical deism is present from time to time, both are interpreted as metaphorical and pragmatic instruments of self-realization. Science, philosophy and intuition are advocated as authority, and productive non-conformity the highest goal of the individual.”

In an academic book of Satanism, "Contemporary Religious Satanism" by Jesper Aagaard Petersen (2009)5, James R. Lewis examines the actual role that The Satanic Bible plays in Satanic debate, and concludes what should by now be obvious: 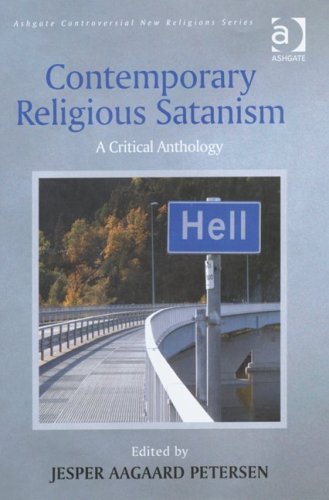 “Satanists do not consciously regard The Satanic Bible in the same way traditional religionists regard their sacred texts. [...] However, The Satanic Bible is treated as an authoritative document, which effectively functions as scripture within the Satanic community. In particular, LaVey's work is quoted to legitimate particular positions as well as to de-legitimate the positions of other Satanists.

5. The Symbol of Satanism: The Baphomet

The Sigil of the Baphomet is an inverted pentacle form, with two points pointing upwards, one downwards, and one to each side. It is the official symbol of the Church of Satan. Inside the pentacle is the image of a goat, its horns filling the upper two points, its ears filling the two lateral ones, and its mouth filling the lower one. This is Satan. The goat and pentacle theme is very old, and has its origins in alchemy. The pentacle is surrounded by two circles the innermost touching the points of the pentacle. In between the two circles are 5 Hebrew characters, spelling LVTHN anticlockwise: Leviathan.”

"Satanic Symbols: The Baphomet and the Pentacle: 4. The Sigil of the Baphomet" by Vexen Crabtree (2008)

My full page on the topic also discusses upturned pentacles in general: "Satanic Symbols: The Baphomet and the Pentacle" by Vexen Crabtree (2008).

Description, Philosophies and Justification of Satanism

Feral House - The publisher that refuses to be domesticated