Friedrich Nietzsche, 1844 Oct 15 - 1900 Aug 25, was a German philosopher who challenged the foundations of morality and promoted life affirmation and individualism. He was one of the first existentialist philosophers. His style was eloquent but harsh, and his arguments had a depth of analysis and wide factual breadth, making him difficult to read, but very convincing. His analytical skills, which are truly great, are usually employed to attack opponents, rather than to debate with them. Even where Nietzsche is clearly correct, his style of writing turns many away. Those who dislike Nietzsche often say he encourages elitism and pushes people forwards in a way that discourages sympathy or camaraderie towards fellow humans. All humans are weak, all humans are frail, all humans need friends, and love, and understanding: critics of Nietzsche say that there is too little of this, too little humanity, in his approach. Fans of Nietzsche say there is too much absurdity and nicety in philosophy, and that their philosopher with a hammer is simply brushing away old cobwebs.

“A professor of Greek at Basel at the age of twenty-five, Nietzsche abandoned philology and, influenced by the ideas of Schopenhauer (1788-1860), he attempted to develop a critique of traditional religious and philosophical thought. Deteriorating health and growing insanity after 1889 brought him under the control of his sister, Elizabeth, who edited and distorted his writings.

Nietzsche's complex and ambitious work stressed the important of will, especially the 'will to power', and anticipated modern existentialism in emphasizing that people create their own world and make their own values - 'God is dead'. A fierce critic of Christianity and an opponent of egalitarianism and nationalism, his ideas have influenced anarchism and feminism as well as fascism.”

People say that the most rewritten paragraphs in any text, in any book, are the first few paragraphs. If you're going to push out a message, hook people into reading onwards, then, it is in the first few paragraphs that you do it. In the world of non-fiction, your prologue contains a summary of the argument, enticing people to continue reading, and find out how exactly you came to those conclusions.

Nietzsche's most well-known and most coherent single piece of writing is Thus Spake Zarathustra; the main character after whom the book is titled, is a great man of wisdom. The story quickly unfolds and the book's first revelations are immediately presented in the first few paragraphs. The lessons being taught are so far removed from what Nietzsche's fans and critics say about him, that they're worth examining.

“When Zarathustra was thirty years old, he left his home and the lake of his home, and went into the mountains. There, he enjoyed his spirit and solitude, and for ten years did not weary of it. But at last his heart changed, - and rising one morning with the rosy dawn, he went before the sun, and spake thus unto it:

Thou great star! What would be thy happiness if thou hadst not those for whom thou shinest!

For ten years hast thou climbed hither unto my cave: thou wouldst have wearied of thy light and of the journey, had it not been for me, mine eagle, and my serpent.

But we awaited thee every morning, took from thee thine overflow and blessed thee for it.

Lo! I am weary of my wisdom, like the bee that hath gathered too much honey; I need hands outstretched to take it. [...]

Therefore must I descend into the deep: as thou doest in the evening, when thou goest behind the sea, and givest light also to the nether-world, thou exuberant star!

Reading the above with a neutral mind, without knowing Nietzsche's reputation, there are some heart-warming jewels of greatness. But there are also, right from the outset, some of the possibly-negative connotations that are commonly the subject of warning from humanitarians. The paragraphs below start with the good, look at the dubious, and end with the dark. How you judge Nietzsche depends on which of three areas you experienced the most when reading his opening paragraphs as quoted above.

Whether or not you like Nietzsche depends on which of the three readings you felt the most, when reading the opening motives of Zarathustra's story.

The next thing that happens is that Zarathustra meets an old man, who has seen Zarathustra before, and the man comments about him, saying that "pure is his eye, and no loathing lurketh about his mouth. Goeth he not along like a dancer?".

We can read this, I think, in two ways. Both of them relate to the third paragraph above, on elitism.

Which of the two above interpretations you think is right simply depends on whether or not, subconsciously, you have come to like Nietzsche, or Zarathustra. Unfortunately, as a philosopher that attracts both great praise and great criticism, most of us have already formed opinions about him without having read a single word.

“Wherever the religious neurosis has appeared on the Earth so far, we find it connected with three dangerous prescriptions as to regimen : Solitude, Fasting and Sexual abstinence.”

"Beyond Good and Evil" by Friedrich Nietzsche (1886b)4

Religious believers often say that their religion makes them happy and that this is one of the reasons for them remaining loyal to their religion5,6. The philosopher Friedrich Nietzsche was distraught by this, blurting out that no-one should "regard a doctrine as true merely because it makes people happy... happiness and virtue are no arguments"7. But even more unfortunately, it happens that across the world, religious countries are still unhappy.

He disliked the poorly-worked-out philosophies that assert the existence of an afterlife:

“When the centre of gravity of life is laid, not in life, but in a beyond - in nonentity, - life is utterly robbed of its balance. The great lie of personal immortality destroys all reason, all nature in the instincts, - everything in the instincts that is beneficent, that promotes life and that is a guarantee of the future, henceforward aroused suspicion. The very meaning of life is now constructed as the effort to live in such a way that life no longer has any point.”

In particular, he fired shots at Christianity:

“The history of Christianity - from the death on the cross onwards - is the history of a gradual and ever coarser misunderstanding of an original symbolism.”

He had a lot to say that skeptics and critical thinkers tend to find agreeable.

“There is something ticklish in "the truth" and in the search for the truth; and if a man goes about it too humanely, I wager he find nothing!”

“Verily, I have done this thing and that for sufferers, but ever meseemed I did a better thing when I learned how to rejoice. Since ever man was he hath too little rejoiced. This only, my brethren, is our original sin! And when we learn better to rejoice we best forget how to hurt others and to contrive pain.”

“The greater part of the conscious thinking of a philosopher is secretly influenced by his instincts.”

“Eventually one must do everything oneself in order to know something; which means that one has much to do!” 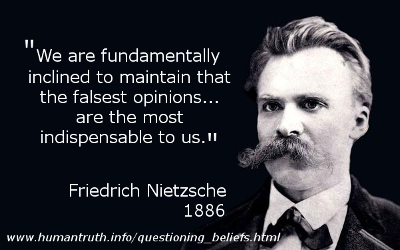